2 more nights of racing have been added to the 2019 Malvern Bank SLMR Series schedule. These two more nights will take the Series to a new race track, 300 Raceway in Farley, Iowa. This will be the farthest east the Series has ever traveled; this will also be the biggest purse in Malvern Bank SLMR Series history. The Yankee Dirt Track Classic will be on Thursday, August 22nd, and Friday, August 23rd, and will pay $5,000 to-win on Thursday night and $400 to-start the feature; Friday night’s feature will pay $12,000 to-win and $600 to-start. Thursday’s feature will be a 30-lapper while Friday’s will be a 50-lapper. All cars running the pre-2018 MBSLMR safety rules will have $50 deducted from each advertised position in the A Feature (please see safety rules in our Series rules) this $50 is a bonus payed to each driver courtesy of Malvern Bank to run the 2019 Series Safety rules. Early entry fee will be $100 for the 2-night special, if paid after the August 19th deadline, entry will be $125. NEITHER RACE WILL BE SCORED FOR MBSLMR SERIES POINTS.

24 cars will qualify through the heats and B-Feature(s) plus 2 provisionals will be awarded each night to MBSLMR Series drivers. A driver will only be allowed 1 provisional for the 2 nights. So, the same driver will not be able to get a provisional for both features. The Hoosier Hard Charger WRS tire will be given to the overall hard charger of the race regardless if they are a Series member or not, provisional starters will not be able to win the hard charger tire. Payout will be paid nightly by 300 Raceway at the Palace Ballroom. The top 3 in the Thursday feature will receive an invitation to the Mobile Tech 22 at Knoxville in September. Friday night the top 5 will receive an invite. If someone that has already received an invite finishes in the top 3 or top 5, it will not be extended back to find the next available car.

There will be 2 changes to the standard MBSLMR rules:

Following our two days at the 300 Raceway in Farley, Iowa will be our third and final trip to the Junction Motor Speedway on Saturday night, August 24th. That race will pay $3,000 to-win. 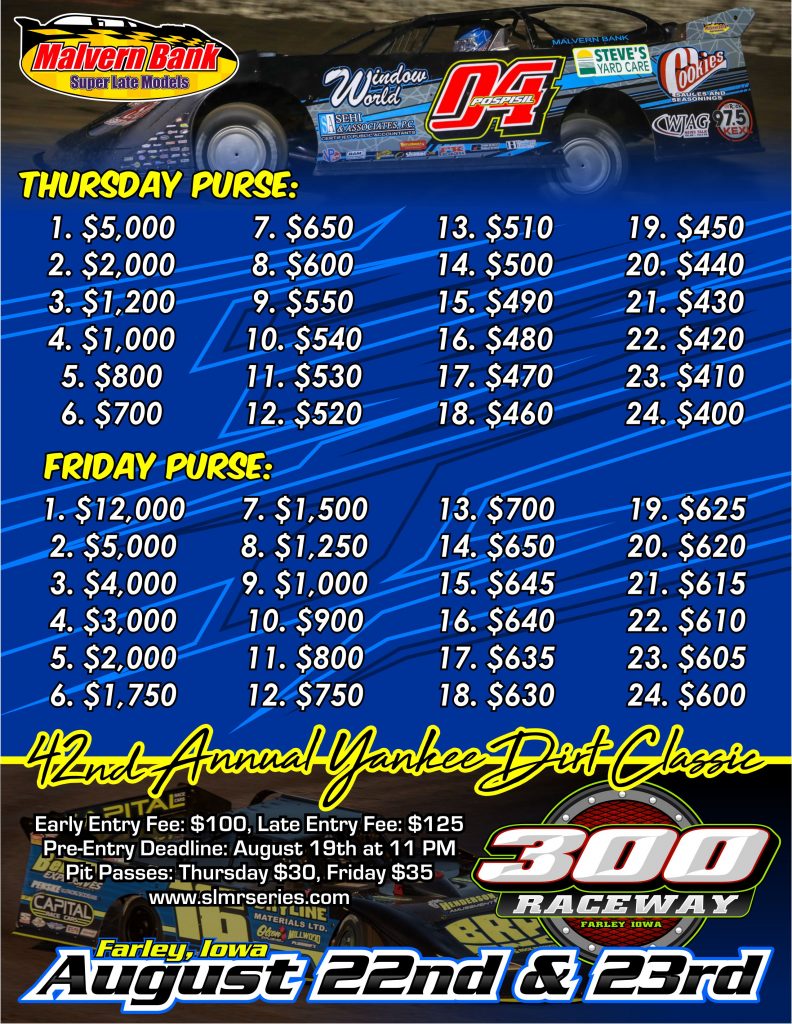